Scalable recipes and formulas are becoming more popular within industry kitchens to ensure, speed, accuracy, waste etc. Chef Services Group has always recommended the use of a scalable format in restaurant development projects. However since CSG is a global company and often works with international clients it is important to understand the conversion from the Imperial System used in the United States and the Metric System used internationally.

The metric system of measurement, also sometimes referred to as the SI for International System of Units is an international decimalized system of measurement that utilizes base units and prefixes in powers of ten. For Units of length the base unit is meter and common prefixes being centimeter or kilometer. When used in scalable recipes the base unit of measure is the gram. For scalable recipes the gram and kilogram are most common with the kilogram being 1,000 grams.

For Chef Services Group it is not as easy as just mathematically converting each recipe from the imperial system to the metric system, when participating in restaurant training and opening they must be able to articulate and convert quickly. By standard there is approximately 28.35 grams in one ounce, which is 453.59grams per pound. In reverse 1 gram is approximately 0.0022 of a pound or 0.035 of an ounce. Once a thousand grams is reached is when the calculation of kilograms will begin; one kilo gram is approximately 2.2 pounds or 35.27 ounces. 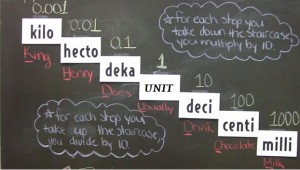 Chef Services Group although fully recommends scalable recipes is willing to adapt their recipe development into any format preferred by the establishment. This includes volumetric, metric and the imperial system.