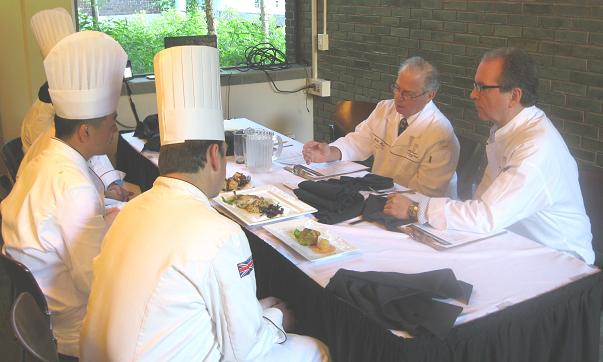 The 18th Annual Tastes of the World Chef Culinary Conference was held at the University of Massachusetts Amherst from June 10th to the 15th. The conference focused on simple foods and healthy eating. Many universities participated in this event such as; Clemens, Villa Nova, Yale, etc. Universities and Colleges like these are responsible for presenting over a million meals annually.

The NACUFS Culinary Challenge is an event that recognizes the skills within the collegiate dinning services as well as their outstanding food preparation and presentation. Chef Walter Zuromski was again for the 12th year, welcomed to join a group of his distinguished peers, including Chef Noble Masi, as a judge for this prestigious culinary challenge.

Each competitor is required create four portions of their complete and balanced, original hot entree that incorporates the featured ingredient. The competitor must not only create this dish in the given space using the provided equipment but they must also follow specific guidelines and rules such as % of daily calories, time limit, knife cuts, etc.

The rubric for judging such competitions allows for the competitors to be assessed by ACF- approved judges on a 40 point scale to determine final placing and distribution of ACF medals; bronze, silver and gold.

The first, second and third place winners all receive cash prizes, however the first place winner of this regional competition will be again competing at the national conference in Boston this July in front of a live audience of foodservice managers and suppliers from the college and university scene.

Chef Walter Zuromski will also be attending the National NACUFS conference in Boston this July to as an ACF judge the National Culinary Challenge along with his distinguished peers.