The outstanding culinary reputation of the Quail Valley Golf Club is due to the Executive Chef/Food and Beverage Director, Chef Jose Faria and his staff.

Chef, as he called is by the Quail Valley team, was born on Sao Miguel, the largest of the Azores Islands of Portugal.  Growing up in a family of five children, Chef lived in the Azores until he was 9 years old. He and his family then moved to Boston, Massachusetts.

Chef began working in the food industry at the age of the 12, washing dishes in a Japanese restaurant.  He continued this job through 9th grade working his up way up from dishwasher to line cook. During high school, he worked at Jason’s running the oyster bar after school and on weekends.

Following graduation from high school, Chef had a decision to make, continue working in the culinary field or attend college.  He decided to do both.  Continuing on to college part time, he also secured a job with the Holiday Inn Corporation in Boston with whom he worked with for 2 ½ years.  Chef next joined the Ritz Carlton Corporation and in addition to his full time position there, also worked at the Royal Sonesta Hotel.  “I didn’t mean to work two jobs.  I just went over to help my friend but after a year I had to quit because I secured a management job at the Ritz.”

Chef stayed at the Boston Ritz Carlton for 5 ½ years where he was trained and schooled in all departments in the kitchen. He was also involved in the opening and reopening of 5 Ritz hotels.  It was during this time that Chef learned one of his passions, ice sculpting.  “It was an art I wanted to learn.  I had a friend who was supplying the Ritz with ice carvings and I hung around to learn the skill” Chef Joe also began competing in food shows and went with the New England Culinary Olympic Team to the Culinary Olympics held in Frankford, Germany in 1988 where he earned a gold medal.

Deciding to leave the corporate world, Chef joined a friend in Cape Cod where he worked at the Chatham Bar’s Inn for 2 years.  The Ritz Carlton began romancing Chef again and he came back to Washington D.C. as the Executive Sous Chef and the was promoted to Executive Chef of the Cleveland property, where he stayed until accepting a position at the Orchid Island Golf and Beach Club.  Upon arriving to Florida’s east coast, Chef Joe immediately fell in love with the area and realized he was home again.  Despite the challenges of opening a new club, he wanted to establish roots in his community.  Chef was nominated the Chapter President of the American Culinary Federation.  During his reign, he hosted two gourmet dinners and a fundraiser for the Chef and child program.  This brought him the recognition from his peers and he won the Chef of the Year award for the Treasure Coast Chapter.

Chef Joe was never one to rest and when heard that the ACF was having food competitions in Palm Beach, the “competition bug” bit him again.  He entered and his team won 2 gold medals in the hot food competition.  Then it was off to Orlando for a silver medal in a National Restaurant Association competition.

In 2000, Chef Joe was presented an opportunity to move to Orchid Island’s sister property, The Windsor Club.  Known as “a village by the sea” with polo, golf, and tennis, Chef realized that with its extensive international membership, his Portuguese roots and cooking techniques could blossom.  In addition to the restaurants, Chef opened a village market where Portuguese wines and quality staples could be featured.

After opening their new Golf Club, Chef was able to host numerous events such as the Treasure Coast Wine Festival, a premier chef and winemaker’s dinner, as well as celebrity guest chef dinners featuring talents like Iron Chef Morimoto from the Food Network.

At Quail Valley Club, Chef Joe had a chance to be a part of the opening team for the River Club.  He created various outlets such as the “2343 Prime”, an upscale steakhouse, the McKeevers Pub Grille, and a scenic riverside garden terrace featuring tapas.

While carrying out the Club philosophy of “We Serve”, Chef grew to know the membership and one member suggested that he join the Chaine des Rotisseurs, an international gastronomic society.  Chef was intrigued and went on to host 3 gourmet dinners for the Chaine which included traditional Portuguese Cuisine event and one where Chef brought back his protégés to showcase their talents.

Chef Joe continues to lend his support for local charities by hosting and chairing events for the Homeless Family Center, the Education Foundation, Humane Society, and the Good Samaritan Soup Drive.

Although dedicated to his career, Chef Joe spends his downtime with his 4 children, Brigham, Meghan, Olivia, and Maya, and his wife Marsha enjoying the Florida waters which remind of his childhood in Portugal. 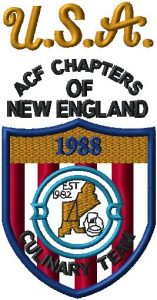